Meet Jessie, one of our sweetest patients. I admittedly love all of our patients, but Jessie was a special girl. Her story was somewhat unbelievable and despite her past cruel treatment, she had the sweetest demeanor. She is a true testament to the loving and forgiving nature of dogs.

Jessie was brought to our hospital for evaluation of a fistula (hole) in her mouth that communicated with her nasal cavity. She was rescued from a neglectful situation where she was given food and water, but not much else. The rest of her history is largely unknown. Her rescuer saw how sweet she was and decided that she deserved a loving and attentive home, and with that, she took her out of the bad situation she was in. With her rescue came the need for medical attention for the defect in her mouth. Just as the rest of her past was unknown, it was unclear how long she had this oral problem or when/how it originated. What they did know is that she had bad breath and issues with food and water getting into her nose. Otherwise she seemed to be coping pretty well.

Upon examination, we noticed that Jessie was missing a large part of the palatal bone that separates the mouth from the nasal cavity. This was in the region of the upper right fourth premolar as seen in the pictures. The 4th premolar tooth was clearly compromised. This must have been causing Jessie so much pain (another reason we can’t use signs of pain to judge dental pain)! Despite this, Jessie willingly let us look around and open and close her mouth with no objections. It often amazes me how trusting dogs are of people they don’t know, even when they are scared. We need to always be mindful of that trust and treat them with respect in return! 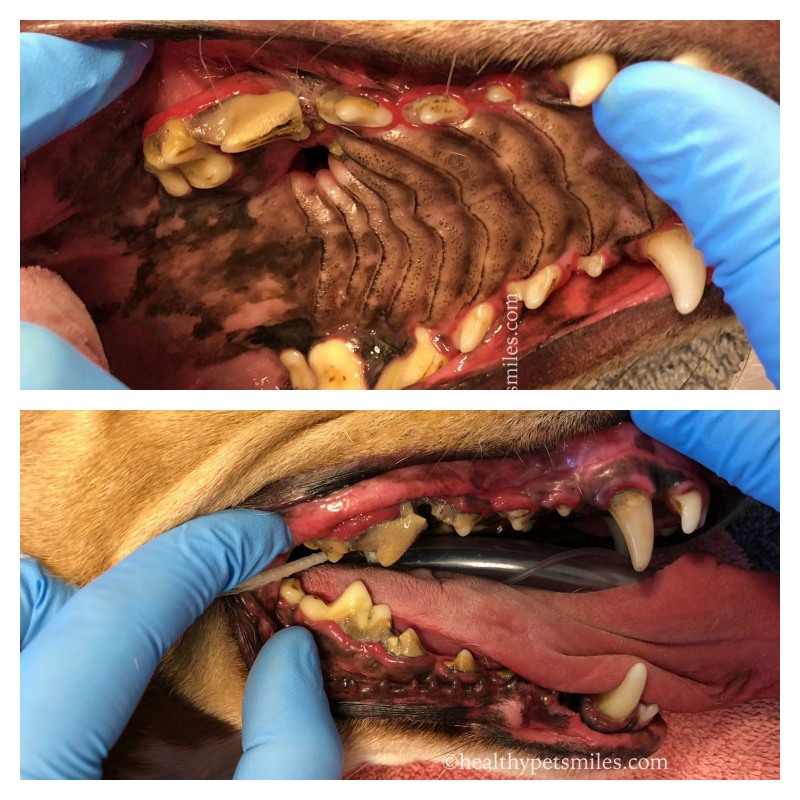 Pictures of Jessie’s injury show a defect in her palate on the inside of the 4th premolar tooth along with significant damage to that tooth.

Fixing defects like this is always challenging and requires skill and the correct materials. An attempt had been made to fix this hole in Jessie’s mouth in the past, but clearly this had failed. Failure with these types of surgeries is common because of the nature of the wound. The lack of bone between the nose and the mouth creates a lot of tension on the surgical closure during eating and breathing. Additionally, if scar tissue has formed from previous surgeries, future attempts are more likely to fail.

After careful consideration, I decided that the best plan for Jessie going forward was removal of all of the cheek teeth on the right side of her mouth (premolars and molars) followed by a large mucosal flap and placement of a bone membrane for support. Removal of the teeth in the area of the defect was necessary for a couple reasons; first, those teeth were diseased and needed to be extracted due to that disease. Second, in order to obtain enough tissue to close over the defect, I would need to use the tissue that surrounds those teeth. The teeth on the bottom jaw (mandible) needed to be removed so that they didn’t hit into the repair. Those teeth become relatively useless after removal of the top teeth anyway, so their removal would not affect Jessie’s function.

After putting Jessie under anesthesia and taking dental radiographs, we came to know the source of all of her problems. Jessie had been shot in the head multiple times with a small caliber gun! Although these were small bullets that did not cause fatal damage, they caused a lot of unnecessary chronic pain and suffering and the need for extensive oral surgery. We are so thankful to the lovely women who adopted Jessie and saved her from a life of chronic pain and infection. No dog (or any animal!) should have to suffer at the hands of humans. 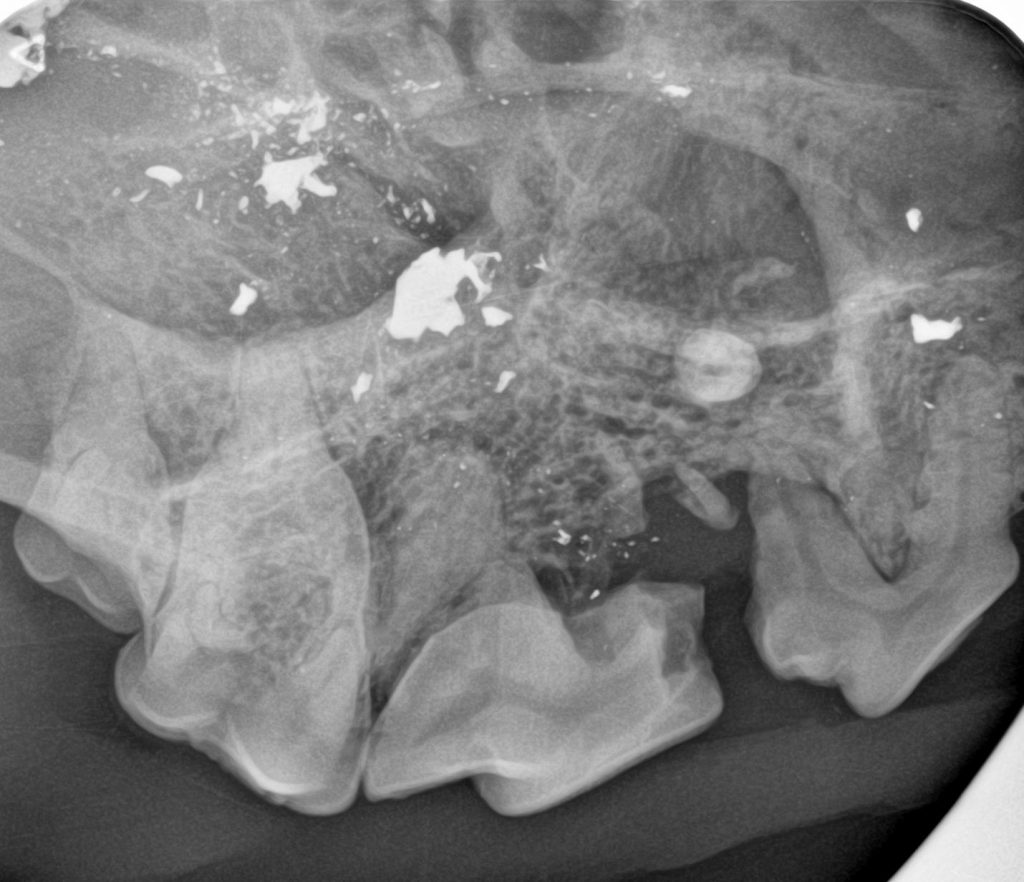 This x-ray of Jessie’s upper jaw reveals the true cause of her problems: gunshot. The white substance in the x-ray is bullet fragments and the 4th premolar has been blown apart.

With the knowledge of the multiple bullet fragments in Jessie’s maxilla (and some scars on her tongue from them as well), we went ahead with the surgery as planned and removed all fragments that we could reach during the course of the surgery. All appropriate teeth were surgically extracted, a large flap was created, and a bone membrane was placed in the open bone defect for support. The site was then closed. 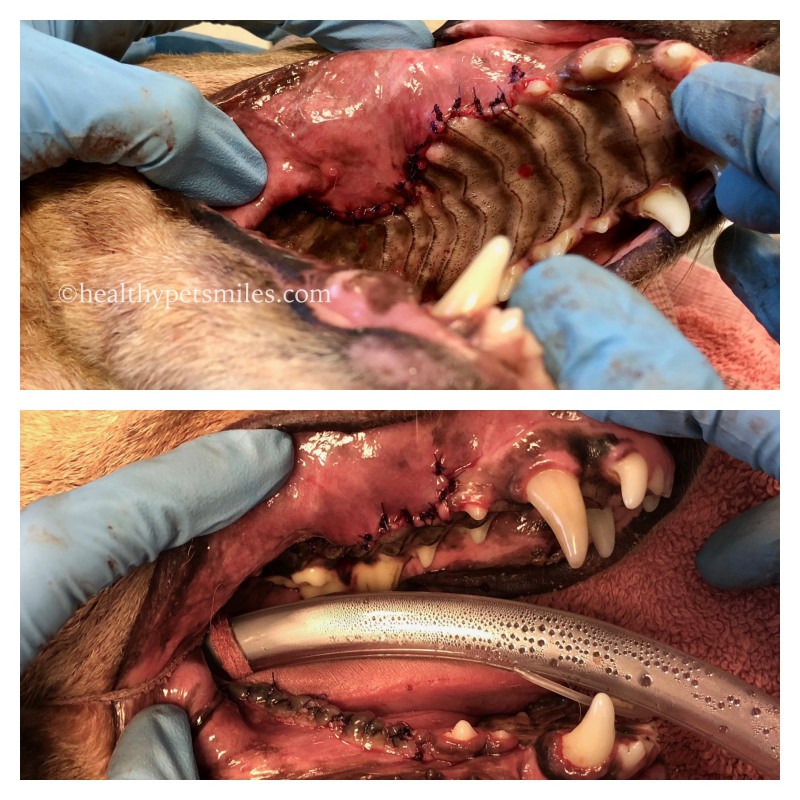 Post-operative pictures of the surgical site with the teeth removed from the upper and lower jaws. 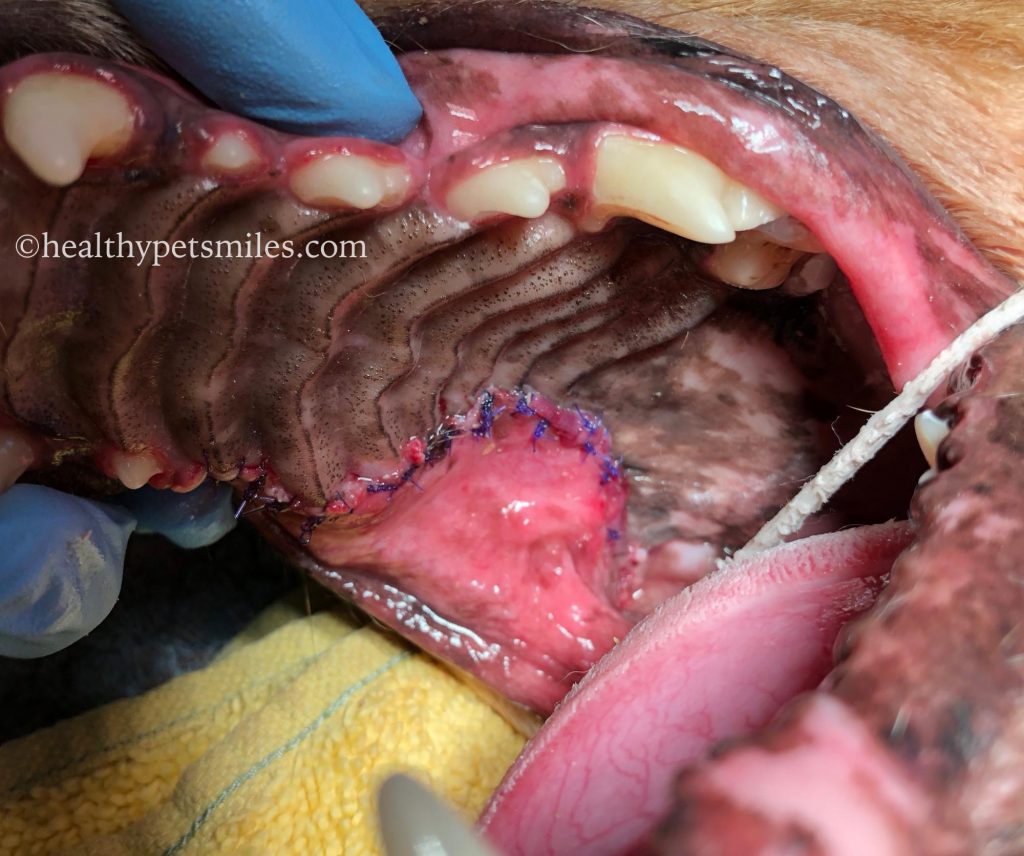 A close-up of the post-operative fistula closure. Dissolvable sutures are used.

This procedure went remarkably well and Jessie’s new family followed our large number of restrictions while she healed. Their dedication to her helped to make this surgery a success! They almost immediately noticed a difference in Jessie as she healed. She was more playful and they just knew that she felt better than prior to the surgery. Jessie healed beautifully and is now back to being a happy playful dog with no oral pain! At her recheck appointments, her tail was in constant motion and she was so happy to let us see her healed mouth (in exchange for some cookies of course!). 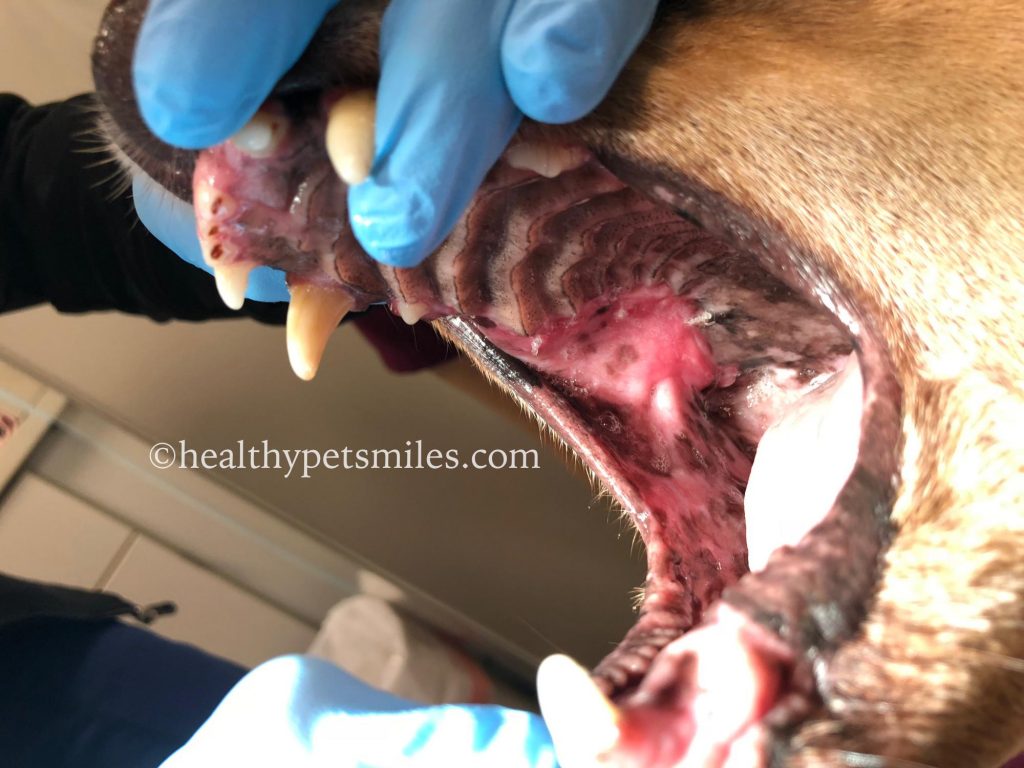 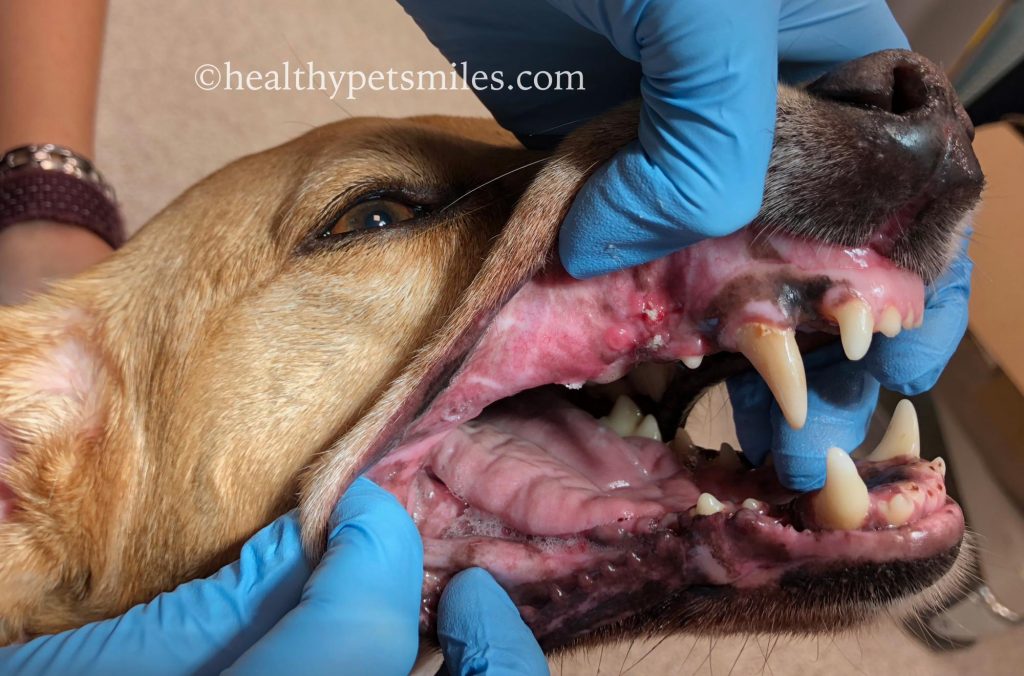 All of her extraction sites are nicely healed as well with a couple of stitches still waiting to fully dissolve.

Jessie is a heart-warming story of the kindness of those who rescue the less fortunate dogs out there. There are so many wins here: Jessie gets a loving home with all the care she needs, and the new parents get a dog who rewards them with unwaivering love. We love you Jessie and are so happy that you’ve found the life you deserve! 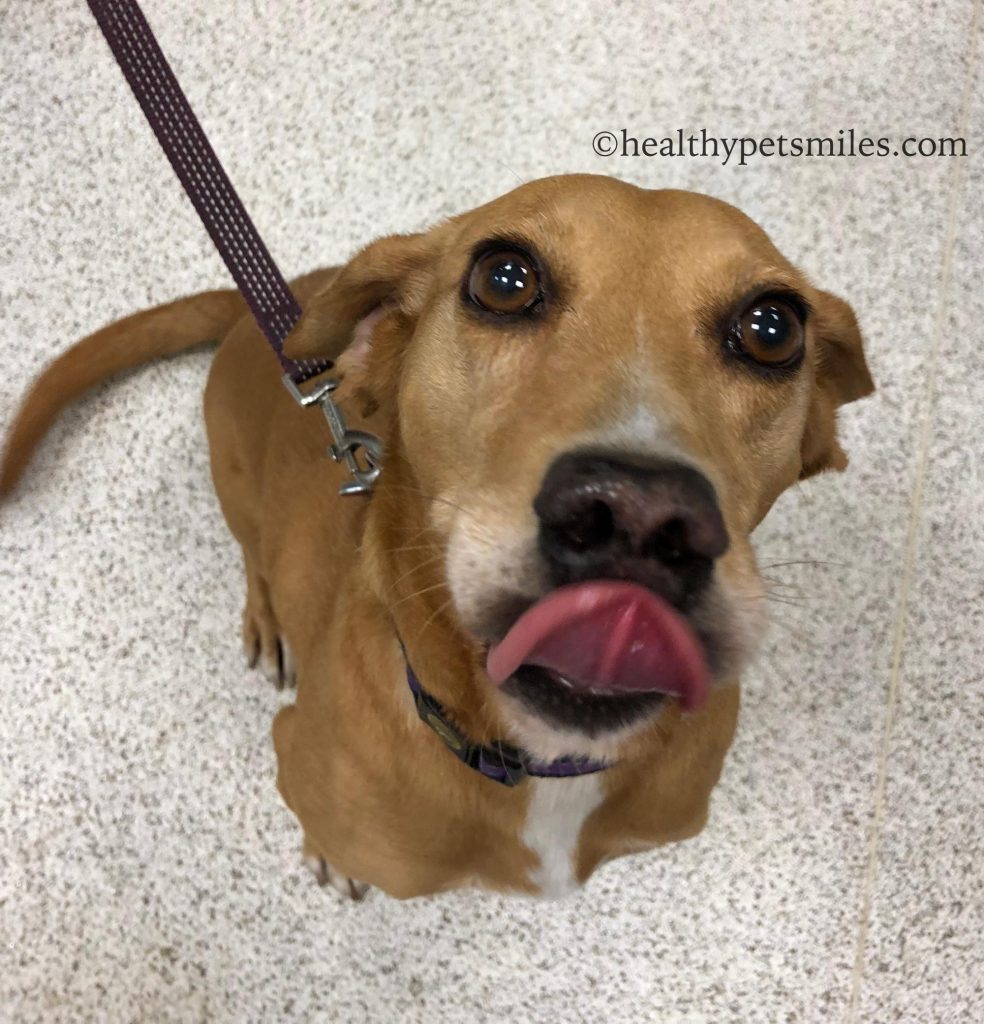 Jessie begging for a cookie at her recheck appointment (she got many of course!).